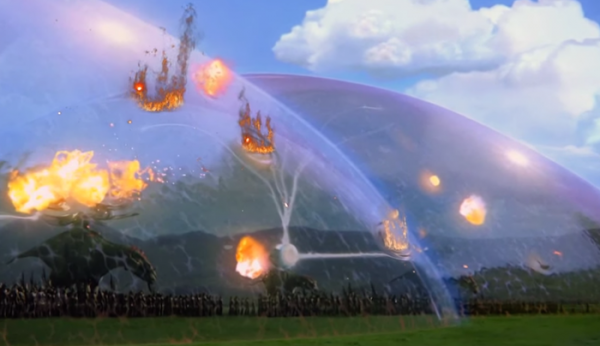 Two days ago I blogged about the continued coverage of the asteroid threat meme, the plans to construct a Hyper Velocity Asteroid Impact Vehicle, and the increasing evidence that the affidavit of Dr. Carol Rosin - the von Braun-Rosian affidavit - is being corroborated. In that blog I pointed out that Russian Prime Minister Dmitri Medvedev, shortly before the Chelyabinsk meteor incident, had called for the construction of an asteroid defense system, one utilizing thermonuclear weapons and "other" systems, which was left unqualified.

We may, however, have some indicator of what some of those "other" systems may be, in this article,and patent shared by Mr. A.O.(and many others):

Method and system for shockwave attenuation via electromagnetic arc

You'll note that this patent is fairly recent, dated to last month of this year. And its appearance publicly is itself significant, for most nations, including the United States, have national security provisions for patents: those which are deemed significant to impact the national security of whatever state in which a patent is taken out, seldom appear publicly until the technology has been secretly perfected.

As the patent and article indicate, the method is to attenuate or weaken the shockwaves of impacts, not to deflect or disintegrate actual debris itself, a kind of "bug zapper" scaled up to enormous proportions. And that's the point: scale the method up, and one might have a means of deflecting, or at least mitigating, the effects of large impacts, from bombs, or - to let the imagination really run wild - asteroids.

And with that last high octane speculative possibility, we're chin to chin with Mr. Medvedev's "other" methods of asteroid defense possibilities. Significant too, I suspect, is the timing of Boeing's patent within the same time frame as the announcement of studies for the possibility of a hyper-velocity asteroid impact vehicle, and the announcement also of the ongoing plans to standardize procedures (and presumably equipment) in the NASA-Roscosmos American-Russian space cooperation.
Interesting too is the fact that such fields were being talked about since the days of Nikola Tesla, and intriguingly, there is documentation from World War Two - a document that American intelligence officers rated as "fantasy" at the time - of German prisoners recounting stories of such fields disintegrating one or two Allied bombers during tests under operational conditions. Fantasy? At that time, very probably. But the idea is there, and now, a patent is there.

And with enough covert money invested over a prolonged period of time, we are probably looking at the public face of much deeper, fantastic, capabilities.

Read this article at -  http://gizadeathstar.com/2015/04/the-space-weaponization-scrapbook-boeings-force-field-patent/
Posted by Unknown at 2:17 AM