Why Would God Allow Suffering?

The audio clip was used with permission by www.reasonablefaith.org
Posted by Unknown at 2:24 AM

The global elite have, over the centuries, refined the techniques they employ to assure continued dominion over the resources of the planet.  In the early days they simply crucified certain rebellious citizens, whilst sprinkling in the occasional peasant massacre to ensure a climate of fear and to thwart any challenge to their hegemony.

When this overtly bloody strategy provoked revolution in such disparate locales as France, America and Russia; and later Cuba, the Congo and Vietnam, the bloodline oligarchs shifted to a strategy of covert assassination and counter-revolutionary intrigues.  But brutality is brutality, however subtle and disguised it may be.

So when this strategy failed to stem the tide of history, while provoking a democratic and thus subversive reaction amongst the populace, the international banking syndicate and its coterie of idle rich turned to psychological warfare.  They learned that it is much easier to control a population through brainwashing than it is to mow down a more cognizant citizenry in the streets and risk backlash.  The key, they learned, was to keep people docile, fearful and ignorant.

In 1913 the Rockefeller Foundation came into being.  It would shield the family’s wealth from the coming income tax provisions of the never-ratified 16th Amendment of 1913.  More importantly it would allow the owners of the Federal Reserve – created that same year – to steer public opinion through social engineering via grant money.  One of its most infamous tentacles was the General Education Board.  In Occasional Letter #1 the Board stated,
“In our dreams we have limitless resources and the people yield themselves with perfect docility to our molding hands. The present education conventions fade from their minds and, unhampered by tradition, we will work our own good will upon a grateful and responsive rural folk.  We shall try not to make these people or any of their children into philosophers or men of learning or men of science…of whom we have ample supply.”

Over the next decades the condescending financial parasites at Club Fed would fabricate all matter of story lines to keep “the rural folk” frightened and inert.  These included the Great Depression, the Cold War, McCarthyism and nuclear Armageddon.  All of these were also, quite conveniently, boons for the international banking syndicate and their defense/oil/drug mafia friends.

Current “scary story lines” include Muslim extremism and global warming.  The former is funded by Britain’s M-15 and the Israeli Mossad and has, two wars later, proven to be a Wall Street goldmine.  The latter, while difficult to refute in fact, is being used to further enrich the casino owners.  Goldman Sachs will, for example, be the biggest beneficiary if cap and trade is initiated.

Should we arrest and prosecute Muslim extremists, like that blond-haired, green-eyed white woman in Pennsylvania?  Certainly.  Should we stop pumping CO2 into our atmosphere, even if we aren’t facing catastrophe?  Of course.  But these things should not make us scared.  Yet that is exactly what the establishment media wants to do.  Fox News right-wing viewers are brainwashed to fear “the Muslims”.  CNN liberal-wing watchers are hypnotized to fear global warming.  Both “scary story lines” have been utilized to both enrich the global elite and restrict our civil liberties.

Read this article at - http://hendersonlefthook.wordpress.com/2014/06/27/the-illuminati-fear-program/
Posted by Unknown at 2:22 AM 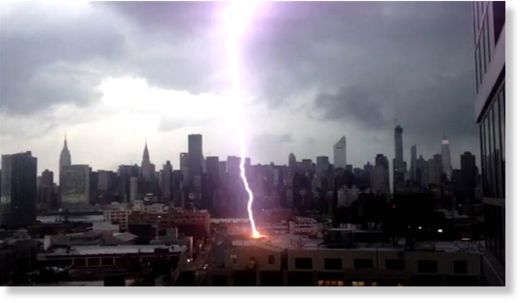 Adverse weather is affecting New York City at the moment, with severe thunderstorms washing over the area on Wednesday evening. The full force of the storm was documented on social media, with Instagram user Dinesh Penugonda capturing spectacular footage of a lighting bolt striking land, with the darkened but unmistakable silhouette of Manhattan in the background. You can see the video below.


Read the rest of this article at - http://www.telegraph.co.uk/travel/destinations/northamerica/usa/newyork/10942725/Spectacular-lightning-strike-captured-in-New-York.html
Posted by Unknown at 2:15 AM

The Calling Forth of the Damned:The Zombie Resurrection and The Day of the Lord - Part 1

Email ThisBlogThis!Share to TwitterShare to FacebookShare to Pinterest
Labels: End of the Age, Pestilence

Another J.P. Morgan Banker Suicide - They Keep Getting Stranger

My own personal theory on this involves the rise of quantum computing, which would have been a specialty field for a physicist.  Quantum computing, for those who possess it, provides a massive advantage over standard computing today 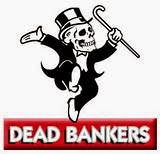 A few days ago I blogged about the strange hit and run death of JP Morgan banker and bankruptcy lawyer Joseph Giampapa in Ohio. But now there’s a story out there circulating about another bankster, one that was previously suicided: Gabriel Magee. It seems, according to the latest story, that Mr. Magee was obsessed with the multi-verse interpretation of quantum mechanics, and that his suicide (so we’re told) had something to do with a possible attempt by him to get out of this universe and into another one:
JP Morgan Bank Exec Kills Himself To Escape Into Parallel Universe
Now, at first glance, your reaction was probably the same as mine: to dismiss this story as being nothing other than a bizarre story designed, perhaps, to deflect attention away from what may be going on behind all the financial “deaths”. But closer reading compels some high octane speculation. Consider these paragraphs from the article:

“An inquest last week has revealed that a JP Morgan exec that committed suicide earlier this year was obsessed with the concept of parallel universes and a mysterious suicide pact between two American students based on the theory.
“Gabriel Magee, 39, fell from the roof of the bank’s Canary Wharf headquarters on the morning of January 28. Investigators revealed to the inquest at Poplar Coroner’s Court in London that a number of documents on Magee’s computer bore desperate messages, like “Trying to jump off building” and “Hate life.”

Then consider these highly significant revelations:

“Magee’s former girlfriend Lucy Pinches told the inquest that Magee had a ‘dark side’ and was ‘traumatized’ after their breakup last year: ‘He was lovely,’ she said, ‘but… he would sit in a room with the curtains drawn, sometimes he didn’t want to socialize. It was very difficult.’”
…
“I don’t understand that properly but that was something Gabe thought about a lot and had the mental capacity to think about it a lot, with the equations and the physics.”(Emphases added)

In other words, Magee was what is known in the financial business as a quant, an individual with a background in the higher mathematics behind high frequency trading. And that mathematics, as a little research will show you, comes from the influx of trained physicists into finance that began in the late 1980s, as the methods of mathematically modelling quantum mechanics were realized to be applicable to the financial sector, and “econophysics’ was born. Would multi-verse theory play a role in such financial modelling? Potentially, yes.
So Mr. Magee’s “suicide” may, once again, be deeply related to something he discovered, or learned, about the financial system. Only by coupling it to econophysics and multiverse theory, the stakes are raised considerably….
Read this article at - http://gizadeathstar.com/2014/07/just-thought-bankster-suicides-couldnt-possibly-become-weirder/
Posted by Unknown at 1:34 AM

Email ThisBlogThis!Share to TwitterShare to FacebookShare to Pinterest
Labels: Dead Bankers, The Moneychangers

Blood on the Altar - The Coming War Between Christian vs. Christian - Part 14

At the time he was rising to global power, Hitler’s audience was Catholic, but his announcement of the Concordat with Rome (the papal agreement, July 5, 1933) had meaning to Protestants as well.