I've referred to this "prediction" by the late Wehrner VonBraun who was the head of the Apollo Moon program for NASA until the first official moon landing in 1969.  I have continued to put this out there for the simple reason that it's been totally accurate up to this point.  And the finish of the prophecy, well, you have to read that for yourself.... 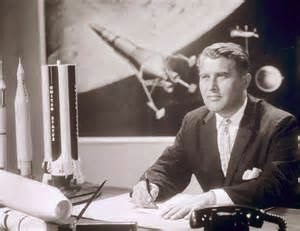 This article is of great interest, because it is a bit of confirmation that the plan, as outlined by Dr. von Braun to Dr. Rosin during their period of mutual employment at Fairchild Industries, is going forward, more or less, on schedule.

For those of you who don't know what the Rosin-von Braun affidavit is, a bit of a review is in order. According to Dr. Rosin, during his final days, Dr. von Braun outlined to her a basic staged timetable of reasons that would be advanced for the weaponization of space. First, he said, the Communist-Soviet bloc would be the reason offered. Indeed, as events turned out, Ronald Reagan's famous Star Wars Strategic Defense Initiative program made public the USA's quest for anti-missile space-based defense systems since the 1950s. As many opined at the time however, basing x-ray and gamma-ray lasers in space might be construed as much as strategic offensive weaponry as defensive. Next, said von Braun, would be :"terrorists," after that, would come "nations of concern," such as Iran and North Korea. Indeed, again, the basic progress would seem to have been confirmed by 9/11 and the events following, and indeed, Iran is often cited as the reason for the American deployment of a missile defense system to Europe. Then, said von Braun, would come asteroids, and then finally, an extra-terrestrial threat.

As I've noted before, we seem to be entering the "asteroid phase" of the affidavit, as there are numerous television programs emphasizing the threat, and readers here will recall that Russian Prime Minister Dmitri Medvedev called for an asteroid defense system shortly before the Chelyabinsk meteor incident. Curiously, Medvedev also called for the use of nuclear and thermonuclear and "other" systems to blow up asteroids, leaving open the question of just what he meant by "other" weapons platforms.

Well, now it seems that a Danish company is working on a nuclear weapons delivery platform, at least according to the U.K.'s Daily Mail:

Real life Armageddon! Spacecraft carrying nuclear explosives could launch by the end of the decade to save Earth from asteroids

The article is crucial in several respects, not the least of which is in its reminder that the danger of asteroid impacts is very real. And that means, like it or not, that the necessity to develop weapons platforms that can deliver weapons of mass destruction to targets in deep space is also very real. The percentages may be small, perhaps even statistically improbable. But who wants to take the risk of not defending against them.

Read the rest of this article at -  http://gizadeathstar.com/2015/04/the-rosin-von-braun-affidavit-a-step-closer/
Posted by Unknown at 1:03 AM