Pocahontas Entered a Marriage of Races

One of the more fascinating characters in American History leaves us guessing as to the really important details, and shows us how easily the truth can become distorted over time... 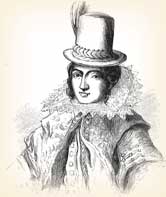 On this day, April 5, 1614 a marriage of two races took place. From the Algonquin Indians came Princess Matoaka, known as Rebecca since her baptism. On the English side was John Rolfe, a tobacco planter and gentleman. The bride's two brothers and an uncle stood up for her. The wedding took place in Jamestown, Virginia and initiated a period of friendly relations between Indians and colonists.

The story behind the marriage is more complicated. Matoaka, or Pocahontas, "Princess," the daughter of chief Powhatan, befriended the invaders of her land. Through her, it was said, the Jamestown settlers obtained food until they acquired the means to survive on their own. She was about ten at the time. John Smith later claimed that Pocahontas saved him from having his brains clubbed out during his captivity with the Indians, but the story was probably concocted to tickle the ears of the English who made over Pocahontas -- then Lady Rebecca Rolfe -- when she visited England.

In 1613, Captain Samuel Argall seized the Indian princess in a raid, planning to exchange her for British prisoners held by the Indians. Taken to Henrico, Virginia she was instructed in Christianity and baptized. The following year, with her father's permission, she married John Rolfe. Rolfe himself wrestled with his conscience whether or not he should marry the girl, but decided to do so, hoping to convert her, "which I beseech God to grant, for His dear Son Christ Jesus' sake."

Whatever the facts regarding Pocahontas, American legend has falsified her story. She is often visualized as a free spirit (perhaps because she was reported by the settlers as turning cartwheels naked when she was a young girl). A popular animated film about her perpetrated many distortions.
Pocahontas is shown singing, for example. In actuality, she would have chanted or droned. She sings of tolerance, a concept developed only painfully in Christian societies. The cartoon shows Pocahontas running the hills alone with a man. Even a chief's daughter would have ground corn and worked hides. Leisure for women and girls (except among the noble classes) was almost non-existent until two centuries ago. Pocahontas is shown at peace with nature. Although Indian animism contained elements placating nature, peace it had not. In one version, Pocahontas is given a pet raccoon. A raccoon would not have been a cuddly pet but would have been destined for the pot.

Popular accounts, in short, impress a residue of semi-Christian ideals upon a pseudo-historical event. Christ changed the world so drastically for women and animals that, even in imagination, we cannot remove the features contributed by faith.

Bibliography:
Read this article at -  http://www.christianity.com/church/church-history/timeline/1601-1700/pocahontas-entered-a-marriage-of-races-11630062.html
Posted by Unknown at 2:01 AM