On The Path of The Immortals — PART 5: Seekers Summon “Them” 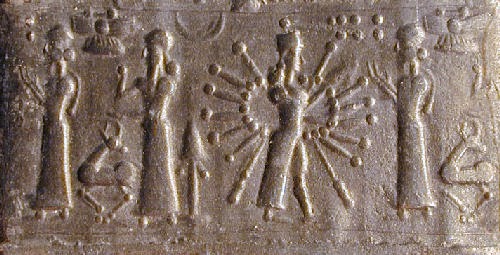 At least conceptually, ancient indigenous thinking seems remarkably similar to modern notions involving parallel universes, multidimensional string theory and interdimensional travel. Anthropologist Brian Ross explains, “The notion of a cosmic portal, a doorway that permits translocation of shamans, spirits, and deities between worlds or levels of the cosmos, is part of a Mesoamerican cosmological tradition.”[1] A Pueblo shrine, “is the doorway of communication between the many simultaneous levels,” [2] by providing, “a flow of energy between this plane of reality and other concurrent realities.”[3] The Ancestral Pueblo residents of Chaco Canyon cut ramps into the cliff rock to connect the roadways on the canyon tops to the sites on the valley bottom. The longest and most famous of these roads is the Great North Road. It represents the connection to the sipapu, the place of emergence of the ancestors or a dimensional doorway. During their journey from the sipapu to the world of the living, the spirits stop along the road and eat the food left for them by the living.

The area was known as an interdimensional portal.  Star People were said to have touched down in ancient times. It was easier for them to come and go here because of the special energies and frequencies. Native Americans kept their contact with other Galactic peoples secret for centuries but now some of them have begun to share their knowledge.[4]

At the end of our expedition with Arizona guide Larry Sprague, he took us to a stone circle medicine wheel and began to play his flute. Medicine wheels, or sacred hoops, are stone monuments used for Native American religious, ritual, healing, and teaching purposes. Traditionally, folks walk around the circle until the flute melody stops prompting the shaman to give a “reading.” However, as Christians, we did not feel it was appropriate to participate in this New Age adaptation of an Indian religious rite. New Age author Richard Dannelley wrote, “We know intuitively that ceremonies that are similar to the medicine wheel open up interdimensional portals that allow Christ Consciousness energies to enter the planetary grid.”[5] Unbeknownst to us, we were about to receive a 10,000 volt jolt of so-called “Christ Consciousness energy” that afternoon albeit it wasn’t as Christ-like as it sounds.

On our second day in Sedona, we visited the famous vortex site Bell Rock. We set up our cameras and I began describing and commenting on film details of an 1980s event when thousands of folks gathered to witness what they believed was going to be a giant alien mothership emerging from the enormous red rock formation. At the time, reporters Joe McNeill and Steven Korn of Sedona Monthlywrote:

On August 16, 1987, Sedona attracted thousands of believers to The Harmonic Convergence, an international event based on the Mayan calendar. The celebration honored an unusual planetary alignment said to usher in an age of peace and harmony. During the festival, a rumor spread that the top of Bell Rock would open and a spaceship would rise from within to depart for the galaxy of Andromeda. A reported crowd of 2,000 to 5,000 people showed up to witness the event, some even paying up to $150 for tickets to sit on Bell Rock at the moment of takeoff.[6]
José Arguelles, the chief promoter of the 1987 harmonic convergence, was asked if the event would include increased UFO activity. Arguelles answered, “Yes, I believe there will considerable UFO activity. More importantly, I believe there will be a message collectively received. The UFOs will be in many places. Perhaps at so-called sacred sites, but maybe in largely populated centers as well.”[7] 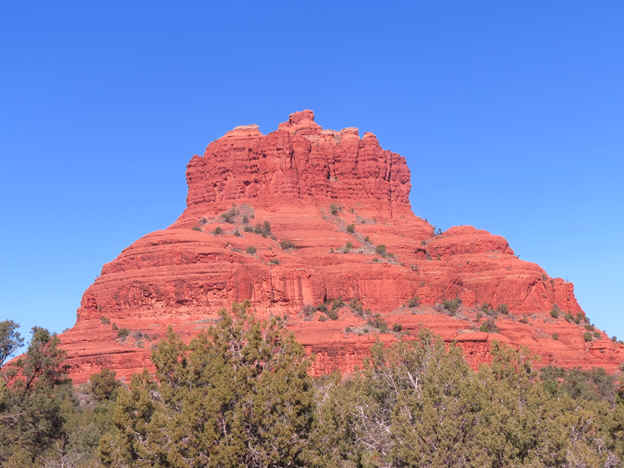 Bell Rock– Home of the Mothership? [8]
Of course, both the “harmonic convergence” and the Bell Rock mothership launch were colossal disappointments for the New Age devotees. But as I was standing in front of Bell Rock delivering my commentary about this to the SkyWatch TV camera, a blonde woman (who will remain anonymous as HK) pulled up in a rented white economy car, parked, and approached. The audio recorder was running during the conversation that ensued and given this was a public space with no expectation of privacy, the audio recorder was left running. The following is an accurate transcription of our exchange. As a helpful pretext, we commend the reader to keep this passage in mind: “And no marvel; for Satan himself is transformed into an angel of light. Therefore it is no great thing if his ministers also be transformed as the ministers of righteousness; whose end shall be according to their works.” (2 Corinthians 11:14–15)