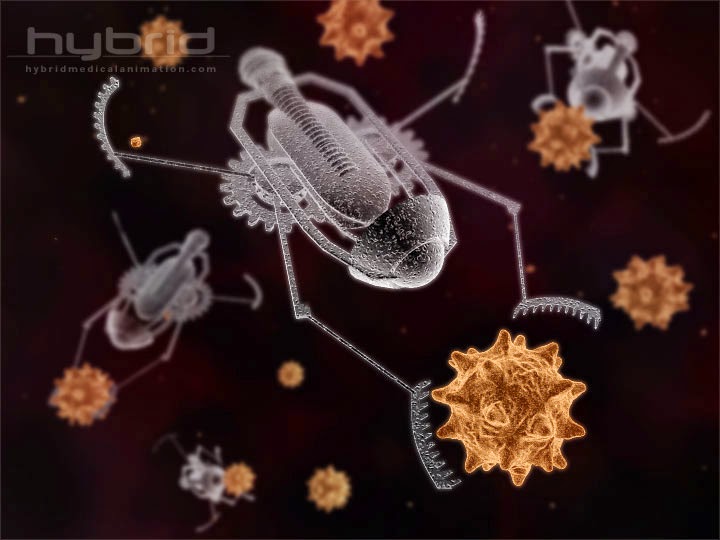 First, recall that the crucial four technologies which transhumanists argue will led to that "alchemical" transformation of man are the so-called GRIN technologies: genetics, robotics, information technologies, and nano-technology. In the last case, nano-technology, we have come a long way from the 1980s popular classic on the subject, Eric Drexler's Engines of Creation. There, nano-technology was still mostly a dream. Sure, by that time, IBM had used a small number of xenon atoms to spell out its corporate name(too much time on their hands, I suppose), and Bell Laboratories had actually built the first man-made atom (WAY too much time on their hands!), but actual self-propelling little machines that could roam about inside an animal's or human's body, ala the 1960s television/movie sci-fi classic Fantasic Voyage, and do "repairs" and other microsurgery, were still a long way off. Indeed, in the Fantastic Voyage version, the idea wasn't nanotechnology at all, but rather, shrinking an entire contraption, rather like a space capsule or submarine, with its human pilots, down to a nano-scale and injecting them into the individual. The human pilots would have to pilot their way through the blood system to the point where they would do their surgery. (The idea was updated, in fact, in a humorous version in a Spielberg movie with Dennis Quaid and Martin Short, Innerspace, in 1987).

All that the stuff of dreams and science fiction.
Until now:

The First Demonstration Of Self-Propelled Nanobots In A Living Animal

The first paragraphs say it all:

"Researchers from the University of California have developed acid-fueled micro-machines capable of traveling and delivering cargo directly inside a living creature. It's a breakthrough that's expected to significantly advance the field of medical nano-robotics.
"Scientists have developed drug-delivering micro-machines before, but these systems were only tested under in vitro conditions (i.e., cell cultures outside the body). But in this latest breakthrough, Wei Gao and colleagues have shown that artificial micromotors can travel inside a live mouse, deliver its cargo, and produce no toxic effects.
"This is definitely an important proof-of-concept. Nanotechnology has the potential to reshape the way medicine is done. In the future, scaled-up versions of this rudimentary micro-machine could deliver important medicines to previously inaccessible parts of the body (e.g., to treat peptic ulcers and other illnesses), fight infectious diseases, or even perform complex tasks like direct cellular manipulation and repair."

As with all technologies, there is vast potential for evil here as well: self-destruction nano-bots would be designed to target specific areas of the body, to induce such things as heart attacks, aneurisms, and so on, and self-destruct, leaving little to no trace of their presence. Forget about those 1960s CIA poison pens, prussic acid cigars, or those KGB polonium pellet umbrella guns. 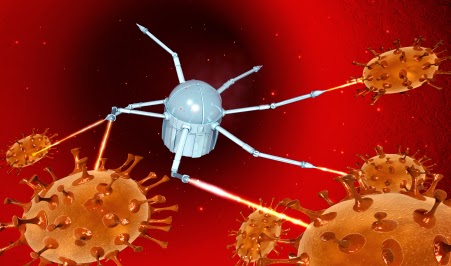 But there's also great potential for good here. One or two immediate applications suggest themselves beyond those suggested in the article: such technology could conceivable be used to break or penetrate the blood-brain barrier, to deliver medicine to people with brain tumors, or even to perform microsurgery on impossible-to-reach aneurisms in the brain, or to deliver potent chemotherapies or even microsurgery on types of tumors currently inoperable, such as glioblastoma multiforms, or surgery on heart valves without open heart procedures, and so on. The potential for good here is very great, and this experiment is a significant step in the use of nanotechnologies in medical applications.
Read this article at - http://gizadeathstar.com/2015/01/transhumanism-scrapbook-self-propelled-nanobots-living-animals-demonstrated/
Posted by Unknown at 12:59 AM