I missed this a couple days back but it's too strange to pass up.  Just what happened does not seem clear, but it resembles some bizarre plant explosions from our recent past as seen in vids below.  Whatever happened was quite strange, and has some of the signature of a space based weapons test.... 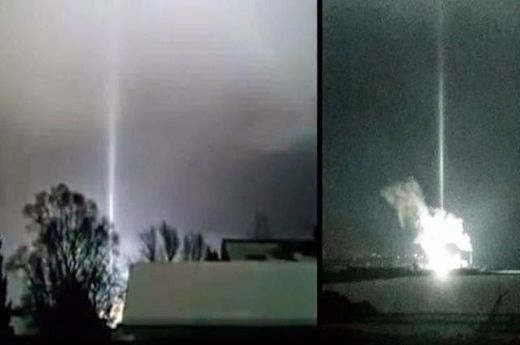 Images of light beam over Escanaba Power Plant, Michigan on February 2nd 2015
Many Escanaba residents awoke Monday to find themselves without power after an explosion at a nearby utility plant substation

Around 1:30 a.m. Feb. 2, an explosion at an Escanaba Power Plant substation caused widespread power outages across the city, according to the Escanaba City Electric Department.

With the failure of the substation's main transformer, officials noted the repairs are expected to require a significant amount of labor to fix .

As crews work to repair the damaged electrical equipment, city staff are warning residents to expect rolling blackouts the next few days. Residents are advised to keep their heat at elevated levels, but to conserve energy elsewhere whenever possible.

The Escanaba School District was forced to close today as well, due to a lack of power.

Those affected by the outage are invited to seek shelter at the Escanaba Civic Center, or to visit warming centers at Gladstone's Grace Baptist Church or the nearby Walmart.

At the moment, city crews are working to restore power along the north and south alleys of Ludington Street, as well on the south side of Escanaba. Areas along First Avenue South to Third Avenue North could see a return of power in the next few hours, officials stated.

Read more on this story at - http://www.mlive.com/news/grand-rapids/index.ssf/2015/02/further_outages_expected_in_no.html

Also, for your consideration...the bizarre light show put on in Ft. Worth Texas about 3 years ago when dozens of transformers blew in just a few minutes...