A Deadly Mix Leads to Martyrdoms in Japan 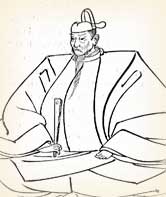 Mix together arrogance, greed, shipwreck, earthquake, Portuguese-Spanish rivalries, and Japanese fears and you have a recipe for the crucifixion of twenty-six Christians. On this day, February 5, 1597 General Toyotomi Hideyoshi crucified six Franciscan friars, seventeen Japanese converts, and three Jesuits because of that mixture of elements.

Hideyoshi rose from humble origins to complete the unification of Japan. As his strength increased, so did his ambition. It did not seem impossible to him that he might even bring China under his heel. He attacked Korea to gain a foothold on the mainland. But China entered the war, and Hideyoshi's troops were beaten. He needed more money if he was to finance his campaign. About that same time, earthquake ruined his lovely new palace.

When Franciscan friars came from the Philippines, Hideyoshi was happy to talk with them and allow them to operate an open mission in Japan although Christianity was illegal. His reasoning was simple. He hoped that the Spanish in the Philippines would be able to offer the Portuguese some competition. The Portuguese had a lock on Japan's trade with China. Their great ships sailed from Macao, bringing silk and gold--but at a high mark- up. Like most of us, Hideyoshi preferred to pay less for more. If he allowed the Franciscans to stay, they would facilitate Spanish trade, just as the Jesuits facilitated trade with the Portuguese. With competition, prices would fall, he hoped.

The Jesuits urged the Franciscans to walk softly and convert Christians quietly. Through hard experience, they had learned that the Japanese were not to be won by brashness. The Franciscans, however, rejoiced aloud over their success with Hideyoshi, celebrated mass openly, and accused the Jesuits of cowardice for wearing Japanese clothes. The Jesuit father Valignano warned that trouble must follow.
No one could have foreseen the exact circumstances that would prove his words true. A typhoon drove the San Felice off course, a Spanish galleon leaving Manila with a cargo valued at more than a million and a half silver pesos. The ship broke up off the coast of Japan and a local samurai appropriated the cargo. The Franciscans, presuming on what they thought were their excellent relations with Hideyoshi, took the matter up with the general.

Hideyoshi coveted the treasure for himself. But he did not want to seize it outright and risk negotiations with the Spaniards. So he did what many governors do when faced by a difficult decision. He smiled, made promises, and waited. His indecisiveness was to prove costly to the Christians.

While Hideyoshi procrastinated his mood changed. According to the Portuguese the Spanish pilot of the San Felice boasted of Spain's many conquests and said local Christians had supported them. The Spaniards say a Portuguese Jesuit denounced them and got them killed.

Whatever his reason, Hideyoshi ordered the execution of all Christians, including the Jesuits. After he thought it over, however, he decided the Jesuits were too useful for trade to be killed, and spared most of them.

During thirty days of torments, which included having their left ears cut off, the Christians were marched to Nagasaki. On this cold February morning, the twenty-six brave martyrs were publicly humiliated and crucified.

Some sang hymns. From his cross, Paul Miki, a Japanese convert, preached: "I have committed no crime, and the only reason why I am put to death is that I have been teaching the doctrine of Our Lord Jesus Christ. I am very happy to die for such a cause, and see my death as a great blessing from the Lord. At this critical time, when, you can rest assured that I will not try to deceive you, I want to stress and make it unmistakably clear that man can find no way to salvation other than the Christian way."

Bibliography:
Read this article at - http://www.christianity.com/church/church-history/timeline/1501-1600/a-deadly-mix-leads-to-martyrdoms-in-japan-11630043.html
Posted by Unknown at 1:23 AM