The question posed at the end of the article is the frightening one.  If this is what they are telling the public about now, what have they already developed and likely been using? 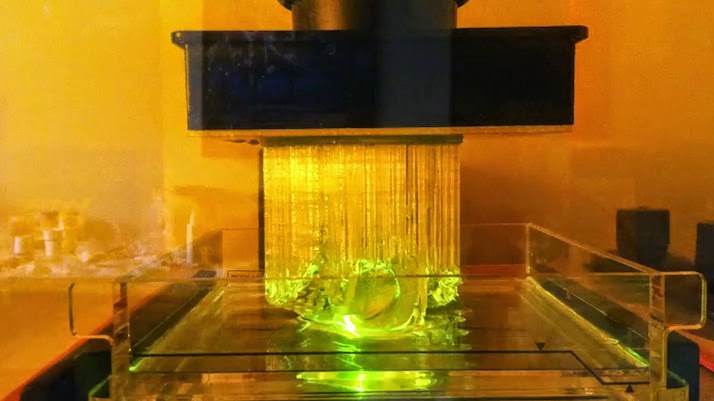 ... If the U.K.'s The Guardian is reporting this story accurately, there's been another quiet little breakthrough on the road to real teleportation of objects via 3-d printing (or additive manufacturing as it is also known). Only this time, the breakthrough is a real "whopper doozie":
Beam me up Scotty: German scientists invent working teleporter, of sorts


"Scientists from the Hasso Plattner Institute in Potsdam have invented a real-life teleporter system that can scan in an object and “beam it” to another location.
"Not quite the dematerialisation and reconstruction of science fiction, the system relies on destructive scanning and 3D printing.
"An object at one end of the system is milled down layer-by-layer, creating a scan per layer which is then transmitted through an encrypted communication to a 3D printer. The printer then replicates the original object layer by layer, effectively teleporting an object from one place to another.
“We present a simple self-contained appliance that allows relocating inanimate physical objects across distance,” said the six person team in a paper submitted for the Tangible, Embedded and Embodied Interaction conference at Stanford University. “Users place an object into the sender unit, enter the address of a receiver unit, and press the relocate button.”
"The system dubbed “Scotty” in homage to the Enterprise’s much beleaguered chief engineer, differs from previous systems that merely copy physical object as its layer-by-layer deconstruction and encrypted transmission ensures that only one copy of the object exists at any one time, according to the scientists."(Emphases added)

While 3-d printing has been advancing by leaps and bounds, to the point that there are now even "3d scanners" that scan an object, allowing it to be replicated in a 3d printing, this new technique is another small but significant step to the "Star Trek" transported, in that, as the article indicates, the object is not scanned (a process which inevitably introduces "errors" into the copy), but actually "milled down" or taken apart layer by layer, and reassembled, layer by layer, at the receiving end. Add the ability to scan the materials composition of an object as it is being "milled down", transmit that data along with the physical dimensions of the object, and one has a simple sort of de facto transporter.

The Star Trek transporter, of course, took this to the ultimate degree, for the transported scanned an object (or person), broke it (or him or her) down to their constituent molecules, atoms, and particles, beamed these through space, and reassembled the whole thing at the other end. In other words, it was a real transporter. Milling an object down is a far cry, one is tempted to say, from that kind of capability. After all, we're nowhere near being able to scan something at that minute atom-by-atom and molecule-by-molecule level, much less, reassemble it.


Except... one would do well to recall that in Eric Drexler's now classic study of the emerging field of nanotechnology, Engines of Creation, published in 1986, he mentioned that IBM had successfully given a stunning display of the ability of engineers, even then, to engineer things on an extraordinarily small scale, by spelling out the corporate logo using a small number of xenon atoms, and that AT&T's Bell Laboratories had gone one better, by constructing humanity's first artificially created atom. It is now almost 29 years later, and one wonders just what such techniques, in conjunction with 3D printing, might have already been covertly accomplished, but if it's anything even close to being able to disassemble your favorite coffee cup and beam it to the hotel you're staying at on your vacation, then a transportation, energy, manufacturing, and financial revolution will inevitably follow.

Read this article at - http://gizadeathstar.com/2015/02/transhumanist-scrapbook-germans-take-another-step-toward-teleportation-conjunction-3d-printing/
Posted by Unknown at 12:00 AM