Feast of Finan, Bishop of Lindisfarne 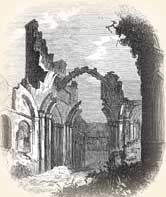 The court of Northumbria was divided. Queen Eanfleda had been reared in the Roman tradition. King Osway had been reared in the Celtic. "Thus it is said to have happened in those times that Easter was twice kept in one year;" wrote the church historian Bede, "and that when the king having ended the time of fasting, kept his Easter, the queen and her followers were still fasting, and celebrating Palm Sunday."

The situation was tolerated while the great Celtic missionary Aiden was alive. This was largely owing to his character. As Bede tells us, "...he industriously labored to practice all works of faith, piety, and love, according to the custom of all holy men; for which reason he was deservedly beloved by all; even by those who differed in opinion concerning Easter, and was held in veneration, not only by indifferent persons, but even by the bishops, Hononus of Canterbury, and Felix of the East Angles."

When Aiden died, Finan, who had trained in the Celtic tradition on the island of Iona, was his successor as bishop on the island of Lindisfarne. Like Aiden, Finan held firmly to the Celtic tradition. No doubt Celts like Finan felt hard pressed. Celtic lands had fallen to Saxon invaders, Celtic culture was disintegrating in face of the invaders, and now even their Christian traditions faced annihilation.
Ronan, a zealous Irishman, and champion of the Roman Easter, disputed with Finan, "Yet he could not prevail upon Finan, but, on the contrary, made him the more inveterate by reproof..." Bede characterized Finan as an opposer of the truth, a man of a "hot and violent temper," but readily acknowledged his saintly character otherwise.

Finan was bishop of Lindisfarne ten years. On the whole, they were successful years. Despite the mounting quarrels over whose religious practices should be observed, Finan sent out missionaries to spread the gospel and he consecrated bishops for the newly converted heathen.
He baptized Prince Peada of the Middle Angles and his "earls and soldiers and their servants" and sent priests to teach them how to live for Christ. When King Osway convinced the East Saxons to return to Christianity, Finan baptized them. He founded several religious institutions, including a double monastery at Whitby (Streanoeshalch).

When he died on August 31, 661 (some sources say February 17th) the issue of Easter was still unresolved. He became known as a saint in England, and a feast day is held for him on this day, February 17 (or on the 9th). In 1898 Pope Leo XIII extended his feast to the Scottish church, too.
After Finan's death, Osway moved to end the confusion of two traditions. Ironically, it was in the Whitby monastery which Finan founded that the Saxons and Celts held a council which decided to adopt Roman customs. Many Celts refused to accept the decision. Had he still been alive, Finan would almost certainly have been one of them.

Bibliography:
Read this article at - http://www.christianity.com/church/church-history/timeline/601-900/feast-of-finan-bishop-of-lindisfarne-11629732.html
Posted by Unknown at 12:44 AM