Every Pilgrim's Story, by John Bunyan 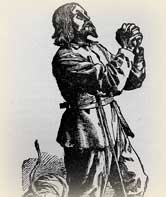 The most popular book of the Christian world, next to the Bible itself saw publication on this day, February 18, 1678. It is a story of fantastic creatures and deadly dangers. In his many adventures, the hero battles with a raging dragon, flounders in a bog from which he is unable to extricate himself, and is chained in a castle, hostage to despair.

The story is Pilgrim's Progress, authored by John Bunyan while he lay in prison for preaching without a license and for other offenses against the established church. Since its publication, it has never been out of print. The book made him famous in his own day and has been a help to Christians for centuries since.

The hero is a pilgrim, a man named Christian, whom we first meet searching for truth and for relief from a terrible load he carries on his back. This load is sin. At the foot of the cross the load tumbles off. Freed, Christian hastens by a path narrow and hard toward an eternal city which is pointed out to him. Along the way he meets a great variety of vividly pictured individuals, some who help and some who hinder him.

And of course, there are giants and dragons: an almost medieval panoply of fearsome or winsome dangers. There is Doubting Castle, the Valley of Shadow and Vanity Fair, all of which the pilgrim must pass.

Rich in allegory, many phrases from the book have come into common use. The narrative itself is larded with biblical quotaations. In the margins John Bunyan cited his scripture references.
Not only English-speaking Christians but also those from the rest of the world have benefited from the tale. Often it is the first book missionaries translate when they complete the Bible in a native language. It has been turned into African, European and Asian tongues.

Surprisingly, the Chinese Communist government also printed the book and 200,000 copies sold out in three days.

Bunyan's pilgrim and all those others who reach the celestial city steadfastly hold one belief: that salvation is of Christ alone. As Hopeful says, "I believed that ...without the righteousness of this Christ all the world could not save me; and therefore thought I to myself, If I leave off [praying to know Christ], I die, and can but die at the Throne of Grace. And withal, this came into my mind, If it tarry, wait for it, because it will surely come, it will not tarry. So I continued praying until the Father showed me his Son."

This remains the Christian gospel. Pilgrim made it safely to the Celestial City by heeding and believing that message.

Bibliography:
Read this article at - http://www.christianity.com/church/church-history/timeline/1601-1700/every-pilgrims-story-by-john-bunyan-11630160.html
Posted by Unknown at 12:46 AM