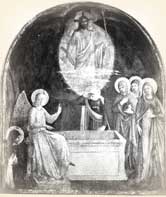 Many scholars believe that Christ died and rose from the dead again in AD 30 (see our April 7 story). Even more prefer a date in AD 33, although champions of several other dates can also be found. If the events recorded in the gospels took place in AD 33, then this day, April 23, 33 is the probable date for Christ's resurrection.

No other event like it has been recorded in history. The significance of the first Easter is breathtaking. In fact, the witness of the apostles and believers across the ages is that without the resurrection, there could be no Christianity. The cross of Christ makes no sense without his triumphant restoration to life. It was the resurrection which explained his death as a sacrifice for sins. It was the resurrection which vindicated his teaching: he was no liar. It is the resurrection that gives us hope of a new, eternal life: as Christ rose, so will we. It is the one fact that the apostles and early church constantly held forth as the vindication of their message. It is the oldest traceable doctrine of the early Christian liturgy. Even notable anti-Christian scholars admit that the early church held the resurrection as fact, however much those same scholars hope to show that the church was mistaken in its belief.

The records we have tell us that Christ was buried. His tomb was sealed and soldiers posted around it. About dawn of the first day of the new week (Sunday) an earthquake shook the tomb. The guards fell senseless. An angel rolled back the stone. Some of Christ's female followers were on their way to the tomb to anoint his body. They wondered how they would roll away the stone. Imagine their surprise when they found it rolled back and the body gone! They supposed it had been removed and laid somewhere else. Weeping, one of them asked a gardener if he knew where the body had been taken. Then she recognized the "gardener" as Jesus himself.

The women rushed back to tell the disciples. Peter and John raced to the tomb. All was as the women had said. An angel assured the men Christ was risen. Afterward, Jesus appeared several times to his disciples (sometimes passing through walls) and to his brother James. Paul lists a number of appearances, including one to over 500 people at once. "And then he appeared to me as if to one born late," he said.

All arguments against the resurrection must take into account the eyewitness testimony of the early disciples, the great church that sprang from them, the witness of changed lives around the world, and the empty tomb. Modern dimensional mathematics at least suggests the plausibility of Christ's appearances.

The church has long insisted that the Christian life would be impossible without the resurrection, for through it Christ removed the sting of death from all those who believe in Him.

Bibliography:
Read this article at -  http://www.christianity.com/church/church-history/timeline/1-300/possible-date-for-christs-resurrection-11629555.html
Posted by Unknown at 2:34 AM