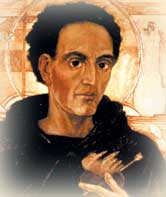 And we were baptized and all anxiety for our past life vanished away." With these joyous words Augustine recorded his entrance into the church on this day, April 25, 387, Easter day.

He had been 33 years in coming to this public confession of Christ. Born in North Africa in 354 of a Christian mother and pagan father, Augustine became at twelve years of age a student at Carthage and at sixteen, a teacher of grammar. At this young age, he was already promiscuous. And he tells in his famous autobiography that he boasted of sins he had not had opportunity to commit, rather than seem to have fallen behind his peers in wickedness.

His mother was determined to see him converted and baptized. He was equally determined to have his pleasures. He took a mistress and she bore him a son, Adeodatus, "Gift of God." For a while he resented the lad but soon became inseparable from him. At 29 his restless spirit drove him to Italy. His mother determined to accompany him so that her prayers might be reinforced by her presence. Augustine gave her the slip, sailing while she knelt praying in a chapel.

In Rome he taught rhetoric for a year, but was cheated of his fees. And so he looked for a more fertile field of labor and settled on Milan. His mother caught up with him and prevailed upon him to attend the church of St. Ambrose. Christian singing moved him deeply. In spite of himself he began to drift toward faith. He found the writings of the Apostle Paul deeply stirring and more satisfying than the cool abstractions of philosophy. He wrestled with deep conviction but was unable to yield himself to God, owing to his attachment to the flesh.

Finally he reached a day when his inner vacillations were too great to ignore. He tried reading scripture but abandoned the effort. Unable to act on the truth he knew, he began to weep, and threw himself behind a fig tree. "How long, O Lord," he cried. And his heart answered "Why not now?" A child's sing-song voice came clearly to him, repeating over and over, "Take it and read it." It seemed a message from God. He snatched up the Bible and read Paul's words, ". . .not in orgies and drunkenness, not in sexual immorality and debauchery, not in dissension and jealousy. Rather, clothe yourselves with the Lord Jesus Christ, and do not think about how to gratify the desires of the sinful nature." Faith flooded in upon him. He immediately thrust aside those sins of the flesh which had held him in thrall for so long.

"But this faith would not let me be at ease about my past sins, since these had not yet been forgiven me by means of your baptism." He entered the water and was relieved. At his mother's death, he returned to Africa where he founded a monastery, became bishop of Hippo and a brilliant and prolific theologian who more than any other stamped his imprint upon the Medieval church.

Bibliography:
Read the rest of this article at -  http://www.christianity.com/church/church-history/timeline/301-600/augustine-of-hippo-raised-to-new-life-11629683.html
Posted by Unknown at 2:54 AM