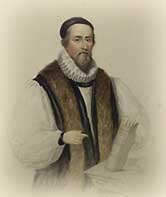 All John Hooper wanted to do was to pray. He went to bed at five the evening before, then rose early, on this day, February 9, 1555, so that he might pray in the early hours of the morning. When it was light, he asked that no one be allowed into his room until the hour of his execution, as he wished to continue in prayer.

At 8 a.m., the men who were to see that he was burned came for him. The sheriff's men were armed with clubs. John took one look at the weapons and said, "Master Sheriffs, I am no traitor, and you have no need to make such a work to take me to the place where I must suffer. If you had told me, I would have gone to the stake, and have troubled none of you."

John was a fervent Puritan. Although he had opposed making Lady Jane Grey queen, he was one of the first bishops arrested when the Catholic Queen Mary came to the English throne. John's strong opposition to Roman Catholic practices was well known. A man with a severe disposition, he had been harsh in his statements. He had even made enemies among fellow reformers.

However, he proved himself a worthy leader when he was finally made bishop of Gloucester. He would have been bishop sooner, but he refused to wear the designated gown. A stint in jail changed his mind. As bishop, he worked with great zeal. He examined all of his clergymen and found that some did not even know the Lord's Prayer, the Ten Commandments or the Apostles' Creed. He set out to remedy this, and to educate the people, preaching every day, often up to four or five times. He was known for his kindness to the poor. The people of Gloucester loved him. In spite of that, under the new government his marriage cost him his position as bishop; and his views on the Lord's Supper (the Eucharist) and other doctrines, cost him his life. Because of his popularity, the executioners had strict orders not to allow him to preach to the crowd.

When he arrived at the stake, John knelt and prayed yet again. He was shown what was said to be a pardon from the queen: his--if only he would change his religious opinions. "If you love my soul, away with it!" he exclaimed, repeating the words for emphasis. He then asked the people to pray the Lord's prayer with him, which they did.

It was a cold morning and the reeds that were supposed to kindle the fire were wet, so John was in torment for a long time. Despite this, he stood quietly, speaking only to plead for more fire so that he could die quicker. The fire had to be rebuilt three times. During his ordeal, John repeated many times, "O Jesus, Son of David, have mercy on me and receive my soul," and similar pleas.

And so he made a brave end. The stump of the stake at which he was burned was rediscovered in the twentieth century and shown to the curious. His writings influenced generations of Puritans and evangelicals.

Bibliography:
Read this article at - http://www.christianity.com/church/church-history/timeline/1501-1600/john-hooper-burned-in-gloucester-11629986.html