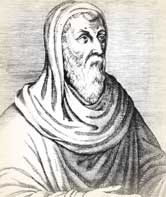 Five thousand troops surrounded the church of St. Theonas in Alexandria, Egypt on this date February 8, 356. Inside, an all-night service had begun in preparation for communion the next day. Calmly Bishop Athanasius sat down and ordered a deacon to read Psalm 103. "Bless the Lord, O my soul, And all that is within me praise his holy name."

The soldiers burst through the doors, swords flashing, arrows flying. Christians screamed and tried to flee. "Get out, get out," hissed the monks to Athanasius. The Bishop refused to leave until the people were safe. In horror he watched as those who stumbled under the heels of the soldiers were trampled to death. He fainted. The monks seized him and dragged him from the platform.

The bishop was not to be found. Miraculously, in the confusion, the monks had spirited away their venerated champion. For the third time since the Council of Nicea in 325, Athanasius went into exile.
At the Council of Nicea he had been a significant background figure in the dispute over Christ's divinity which Arians denied. There Emperor Constantine backed the virtually unanimous decision of the assembled Bishops. Later, however, the emperor fell under the sway of the Arians. Under Constantine's successors, Arians influenced the court at Constantinople. Athanasius' defenses of Christ's divinity became "politically incorrect." His firm championship of the Nicean position was viewed as political resistance by Arian partisans. To consolidate their political power, the Arians tried to seize control of the church and stifle the voice of the "traitor" Athanasius.

Constantinople sent Bishop George, an Arian, to fill Athanasius' place. He unleashed a spate of persecution, banishing sixteen orthodox bishops from Alexandria. Using terror and murder, George tried to force Egypt to accept a new creed in place of the Nicean. A price was placed on the head of Athanasius. Agents searched everywhere for him. But the Egyptians loyally hid their beloved teacher.
Eventually George was ousted. Athanasius returned. Twice more opponents forced him into exile, but eventually he died peacefully. Not so George: When he returned to Alexandria, a mob killed him.
The world always opposes any view of Christ which portrays him as the Only Begotten Son of God, our sole means of salvation. Athanasius' sufferings were the result of his stalwart defense of Christ. He deserves our admiration, for he defended sound doctrine regardless of personal cost.


Bibliography:
Read this article at - http://www.christianity.com/church/church-history/timeline/301-600/athanasius-exiled-again-11629666.html
Posted by Unknown at 11:50 PM