King Charles I on the Scaffold 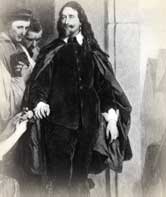 This day, January 30, 1649 was so bitterly cold that the Thames froze over. King Charles I of England was afraid that he might shiver and people think he was trembling from fear, so he donned an extra shirt. He chose his other clothes with care so that he might look his best. "I do not fear death," he said. "Death is not terrible to me. I bless my God I am prepared."

Despite the errors that brought Charles to the scaffold, there is no denying his obedience to the forms of faith. He knelt in prayer every morning of his reign, even on hunting days. But Charles could not get along with Parliament. Every Parliament sought to rebuke him before giving him money, and so he quickly dissolved them. The third Parliament, aggrieved by Charles' high-handed actions, managed to prepare what is known in England as "a petition of right," which it obliged him to sign before he dissolved it. He dissolved his fourth Parliament when it opposed taxes he levied which should have had Parliamentary approval. The king decided to rule without any parliament at all.
For eleven years he did. To raise money, he taxed ships. Calling this illegal, John Hampden, a member of Parliament, resisted paying, and the matter became a cause celebre, but a high court upheld the king, allowing him to continue the practice.

Charles raised bishop William Laud to the powerful Star Chamber and Court of Commissions from where he oppressed the king's opponents. Laud also tried to force a new prayer book on Scotland. Charles had long wanted to compel the Presbyterian Scots to accept a liturgy based on the Church of England's. Great numbers of Scots pledged to resist the changes. These "Covenanters" defeated Charles in battle.

Again Charles called a session of Parliament. It would not give him money until it stated the nation's grievances. Charles dissolved it. But after another defeat in Scotland, his financial straits forced him to call a Parliament in November, 1640. This was the famous Long Parliament that impeached Archbishop Laud and executed him. The House of Commons prepared a Grand Remonstrance against Charles. He entered Parliament with an armed force to arrest five members. The Commons called out London's militia for protection.

With the smell of war in the air, the queen fled to the Netherlands. Charles left London for York where noblemen gathered to his side. The Puritans, who had suffered much at Laud's hands, took Parliament's side. After five years of Civil war, Charles fell into Parliament's hands. He escaped and rallied the Scots to his cause, but Oliver Cromwell defeated them and Charles again became the prisoner of Parliament.

The Commons appointed a commission of sixty-seven to try Charles. Most members of Parliament were opposed to killing the king. When the death sentence was passed, only half the commissioners were present--and some of them balked at signing. There was great difficulty finding executioners. Cromwell overcame these and other obstacles and brought Charles out to be executed.

The king had planned to speak to the crowd before he died, but barriers around the scaffold prevented them from seeing him. When he saw the block, he asked for a higher one. None could be found. A bystander felt the edge of the axe. Charles pleaded that he not dull the blade. To the fifteen men who were in earshot, he read his last speech. Turning to Bishop Juxson he said, "Remember," and gave him his bedside prayer book. Then he tucked his hair under a white cap so that it might not impede the blade. "I am going from a corruptible to an incorruptible crown, where no disturbance can be," said the king.

The executioner asked pardon. Charles said, "The king cannot pardon a subject who wilfully sheds his blood," then added, "I pray you, do not put me to pain." He prayed a last prayer and lay down flat with his neck on the block. The crowd saw the axe flash high and heard its thud. With a single voice, they groaned. Their willful but brave king was dead.

Bibliography:
Read this article at - http://www.christianity.com/church/church-history/timeline/1601-1700/king-charles-i-on-the-scaffold-11630119.html
Posted by Unknown at 1:10 AM