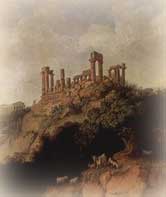 St. Eusebius is not one of those popes whose name brings instant recognition like Gregory the Great, Hildebrand, Julius II or Leo X. It appears he was pope only four months, and history is not even clear whether it was in the year 309 or 310.

The son of a physician, Eusebius was a Greek. Having said that, we have pretty much exhausted our knowledge of his background.

He began his short term on this day, April 18, 309 or 310. He immediately faced serious problems within the church, which was quarreling over whether on not to readmit brethren who had fallen from the faith during the recent persecutions. Eusebius sided with those who argued for readmittance upon completion of a stiff penance.

But not everyone was buying this solution. The Novatians said there should be no restoration at all. On the other hand, many of the lapsed demanded immediate readmittance to the church. One of these groups elected a rival pope, Heraclius. The squabble erupted into violence.

Exasperated, Emperor Maxentius exiled both the pope and the antipope. Eusebius was ordered to Sicily, where he soon died.

For a year, no pope was chosen. At the time, Galerius was persecuting the eastern church with great ferocity. When Miltiades finally became pope in 311, he brought Eusebius' bones back to Rome for an honorable burial in the Cemetary of Calixtus. Later, this tomb was damaged. However, copies of its inscription survived and they tell us almost everything that we know about this obscure bishop of Rome.

Because Eusebius defended the tradition of discipline that he had inherited, and because he died in banishment he was considered both a saint and a martyr.

Bibliography:
Read this article at -  http://www.christianity.com/church/church-history/timeline/301-600/pope-eusebius-began-short-reign-11629639.html
Posted by Unknown at 1:50 AM