Jesus' Death: Six Hours of Eternity on the Cross

Lambert Dolphin
A superficial reading of the gospel narratives concerning the death of Jesus will show that He was nailed to the cross at 9 o'clock in the morning, and was dead by 3 in the afternoon. His terrible ordeal, it would seem, was over in a mere six hours.

The agony in the Garden of Gethsemane the night before had been an ordeal in prayer before His Father that we can scarcely understand. The writer of Hebrews comments on this incident,

"In the days of his flesh, Jesus offered up prayers and supplications, with loud cries and tears, to him who was able to save him from death, and he was heard for his godly fear. Although he was a Son, he learned obedience through what he suffered..." (Hebrews 5:7, 8)

Then, too, Jesus had been up the rest of the night without sleep enduring beating, cruel mockery and unspeakable brutality. The next morning, the Romans scourged Him. (Mark 15:15, John 19:1).
Jesus was already greatly weakened when he carried his cross, stumbling, to the place of crucifixion alongside the main public highway, probably just outside the Damascus Gate.

Several medical doctors and forensic experts have written books about the common Roman form of execution---death by crucifixion. Often the process took several days. The nailing of hands and feet forced the victim to push up against the weight of his own body to take a single breath. In the hot sun, terrible thirst ensued and death came in most cases from suffocation amidst great pain. The victim was also naked and humiliated---death on the cross was reserved for the most wretched of all criminals. Wood was in short supply in Israel in Roman times. It is likely that small trees (such as these olive trees) were pressed into service to handle the thousands of executions. Crosses were stuck into the ground along major thoroughfares to offer maximum public viewing which included public ridicule and scorn. The terrible nature of this punishment helped enforce Rome's control over the Jews whom they hated anyway. In the Law of Moses hanging a criminal on a tree or cross was reserved for the most serious crimes, "And if a man has committed a sin worthy of death, and he is put to death, and you hang him on a tree, his corpse shall not hang all night on the tree, but you shall surely bury him on the same day (for he who is hanged is accursed of God), so that you do not defile your land which the Lord your God gives you as an inheritance." (Deuteronomy 21:22-23)

There is much more to the death of Jesus on the cross than the visible suffering, terrible pain and suffering, and the incredible ignominy of such a horrible death for One who was not only innocent but also the very Son of God.


The Cosmic Struggle on the Cross

After speaking of Jesus and his role in the creation of the universe Paul in his letter to the Colossians tells us about invisible events taking place outside of the physical realm, and outside of our ordinary space-time continuum during the dying of Jesus on the cross,


...in Jesus all the fullness of God was pleased to dwell, and through him to reconcile to himself all things, whether on earth or in heaven, making peace by the blood of his cross. And you, who once were estranged and hostile in mind, doing evil deeds, he has now reconciled in his body of flesh by his death, in order to present you holy and blameless and irreproachable before him. (Col. 1:19-22)

The above passage reveals that not only did Jesus take upon Himself the sins of mankind when He died for us on the cross, but He also met fully the onslaught of demons, fallen angels, and all the power of evil forces in the heavens as well, disarming all of them completely.

Jesus' victory over man's greatest enemy, death, is boldly stated in the letter to the Hebrews:


"Since therefore the children share in flesh and blood, he himself likewise partook of the same nature, that through death he might destroy him who has the power of death, that is, the devil, and deliver all those who through fear of death were subject to lifelong bondage." (Hebrews 2:14,15)

In speaking to the Apostle John from the heavens, Jesus sent these words to mankind:

Jesus, on the cross, also won back any and all claims Satan had on man, or the earth, or as an authority of any kind in the heavens. If, for example, Satan claimed to hold the title deed of the earth (having gained it because of Adam's fall) that deed now belongs to Jesus as one of the results of His work on the cross. (This is known as the "ransom" work of Christ on the cross---it's a topic sometimes debated by theologians, but one that makes sense). Satan's destruction, too, was accomplished on the cross, outside of time. For the final outworkings in history of Satan's we now eagerly are all waiting. What is a completed work in the eternal time frame will come to pass in human history at God's appointed time on our earthly calendars. His unseen and invisible victory over cosmic evil on the cross is yet another reason why Jesus alone is qualified to receive from the Father all honor and power and glory:

Two aspects of the death of Christ show something of the mystery of His death and the suffering He took onto Himself for our sake. The death of Jesus on the cross took but six hours as measured in dynamical time. Jesus was, for the first three hours on the cross, our Great High Priest. From noon till 3 P.M., during which time a strange and terrible darkness came over the earth, the High Priest became the Sacrifice.

If we now consider the nature of time and eternity (see Arthur C. Custance, Journey out of Time, Ref. 2) it must surely become clear that what was (for us) three hours' suffering by Jesus in total estrangement from the Father---was for Jesus an event in eternity which never ends. The work of Jesus on the cross, as far as we are concerned, is completely finished. Jesus is not now hanging on a cross. He has been raised from the dead, and sits in heaven, fully in charge of the universe as a resurrected man. One man, one son of Adam, Jesus the Lord is now living in glory and He is in charge of the universe. 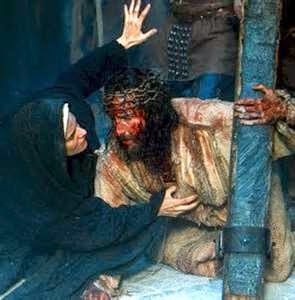 But in another sense, if we could step into eternity and view an eternal being such as the Son of God experiencing life---if we could see things from the vantage point of eternity---then we would perceive that a part of the eternal God must suffer forever, outside of time, because of human sin.


The Eternal Sufferings of God in Christ

The statement of Jesus to one of the thieves crucified alongside him was, "Truly, I say to you, today you will be with me in Paradise." (Luke 23:43) This statement suggests that when He died, Jesus left our time frame and immediately entered eternity. Likewise, the spirit of his companion on an adjacent cross, the dying, redeemed thief also left time and entered eternity when he also died that same day.

The next event in eternity for the human spirit of Jesus was His return to reenter His body in the tomb just before dawn on Easter Sunday morning. By means of the mighty power of the Holy Spirit, He then experienced the complete transformation of His body and His resurrection "out from among the dead." In the time frame of earth, these events are separated by perhaps 40 hours, but in eternity they are an immediate sequence of events, one following another. The dying thief was not raised from the dead at the same earth time as Jesus was raised from the dead. However, in his own (the thief's) consciousness, he stepped out of time to join the general resurrection of all the righteous dead which coincides in history with the Second Coming of Christ.

In this sense, neither heaven nor hell are yet populated---all believers reach heaven at the same "time." The dying thief, Stephen the first martyr, the Apostle John, and all the rest of us will arrive in heaven at precisely the same "instant," experiencing neither soul sleep nor loss of consciousness nor time delay, whether the interval between our death and the Second Coming is a hundred years or one hour. The thief on the cross, in his own consciousness, will experience arriving in Paradise the very same day he died, as Jesus promised he would. (Of course if heaven is still empty, except for Jesus, from our vantage point in time, the prayer to Mary or St. Jude or any of the saints is pointless. These believers are each "time traveling" in their own split-second interval separating their individual death from the great resurrection of all of us believers. Thus, we all get to heaven at the same "time."

In His sinless and perfect human body---prepared especially as a perfect blood sacrifice for the sins of the world---Jesus suffered terribly in body, soul, and spirit during the long night of His trial. That suffering began with the agony in the garden of Gethsemane and in all the humiliating events of His trial and cruel torture prior to His morning journey to Golgotha. The worst was yet to come. Death by crucifixion is an especially painful and terrible death. It was common in Roman times for crucified men in good health to hang dying on a cross sometimes for days, yet Scripture records that Jesus died within six hours' clock time. Even if He only suffered normal human pain in this ordeal it would have been incredibly severe.

All this pain, however, was but the prelude to His real suffering, which involved being cut off from the Father's love and presence and consigned to carry our sins out of the universe, to hell as it were, like the scapegoat sacrifice of Israel of which he, Christ, is the antitype.

The Scripture records three statements by Jesus during the first three hours on the cross when He served as the true Great High Priest before the Father and four further statements during the time of darkness from noon to 3 P.M. when the High Priest became the Sin-Offering. It was during the latter three hours, evidently, that the sins of all mankind were laid upon Jesus and the Father turned His face away from His beloved Son.


"For our sake he made him to be sin who knew no sin, so that in him we might become the righteousness of God." (2 Corinthians 5:21)


Read the rest of this article at -  http://www.ldolphin.org/sixhours.html
Posted by Unknown at 1:46 AM