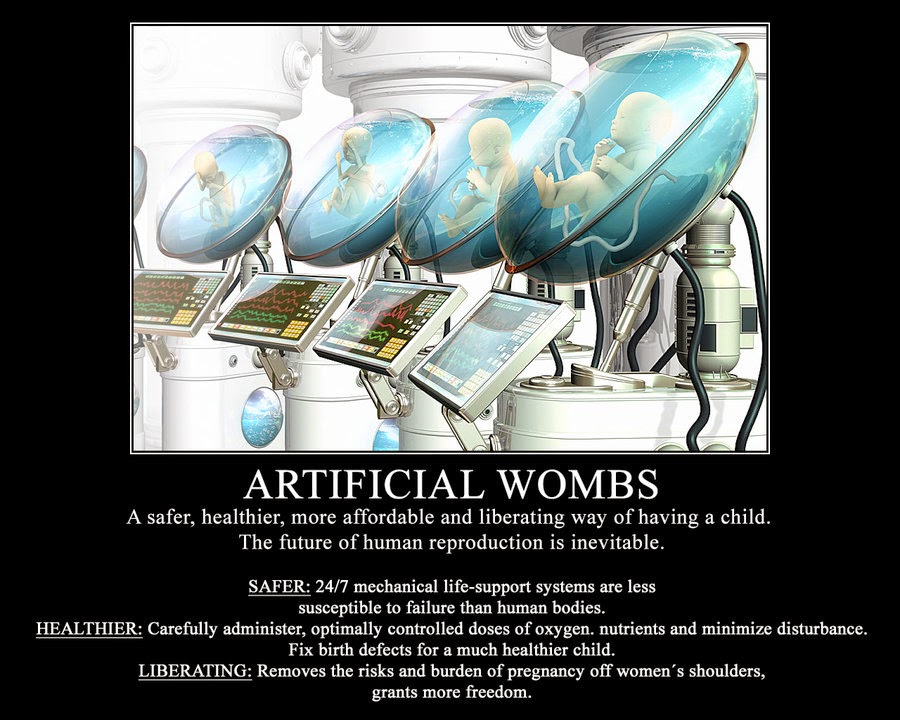 In the insane rush of transhumanism to rob humanity of the last vestiges of...well... humanity, there's now the artificial womb (and thanks to Ms. S.S. and S.H. for finding and sharing these articles):

The Artificial Womb Is Born: Welcome To The WORLD Of The MATRIX

Perhaps the story here can be summed up with the opening passges of the first article:


"The artificial womb exists. In Tokyo, researchers have developed a technique called EUFI — extrauterine fetal incubation. They have taken goat fetuses, threaded catheters through the large vessels in the umbilical cord and supplied the fetuses with oxygenated blood while suspending them in incubators that contain artificial amniotic fluid heated to body temperature.
"For a moment, as you contemplate those fetal goats, it may seem a short hop to the Central Hatchery of Aldous Huxley’s imagination. In fact, in recent decades, as medicine has focused on the beginning and end stages of pregnancy, the essential time inside the woman’s body has been reduced. We are, however, still a long way from connecting those two points, from creating a completely artificial gestation. But we are at a moment when the fetus, during its obligatory time in the womb, is no longer inaccessible, no longer locked away from medical interventions.
"The future of human reproductive medicine lies along the speeding trajectories of several different technologies. There is neonatology, accomplishing its miracles at the too-abrupt end of gestation. There is fetal surgery, intervening dramatically during pregnancy to avert the anomalies that kill and cripple newborns. There is the technology of assisted reproduction, the in-vitro fertilization and gamete retrieval-and-transfer fireworks of the last 20 years. And then, inevitably, there is genetics. All these technologies are essentially new, and with them come ethical questions so potent that the very inventors of these miracles seem half-afraid of where we may be heading."

And this passages from the second article:


"Whether Haldane’s view will prove correct about the specific timing of when ectogenesis might become popular, or the numbers of children born that way, it’s certain that he was correct that tAt the same time, he was right that the societal implications are sure to be significant as the age of motherless birth approaches."

"The age of motherless birth approaches..."  That says it all.

And it is this I find so disturbing. There will doubtless be some who view the whole notion as a great boon to humanity: parents unable to have children for whatever reasons of health, a woman unable to bear children but who nevertheless wants them, might, should the arc of technological development suggested in the two articles continue, be able to do so. And of course, all of this will be "sold" to humanity as a good thing. Call me a Luddite, if you will, but I am not so sure. Far from it. Our earliest contact with other human beings occurs in our mother's womb. We hear her heartbeat and breathing and conversation. We might hear, even, distant and muffled, our father's voice. But our human development begins there and not, as some would have it, outside the womb. Our personhood begins there in that primordial ocean, surrounded by the muffled voices of a community of remote indecipherable gods from the get-go.

But now our technology threatens to take away even this most primordial humanizing experience, and, if one read between the lines a bit, it is a profoundly anti-feminine, anti-female agenda that it portends; it is a kind of technological rendering of superfluousness of the feminine and the female that I find so disquieting about this, for our first human interactions, whether we are male or female, is in the womb, with our mothers.  We can imagine, of course, the kind of totally "technotronic era" envisioned by twisted minds, where everything is plotted and planned by the great corporate state: this seminal sample will be matched with that egg sample, be born in an Ehrlenmeyer flask, and nurtured in a test-tube tank with the appropriate "nutrients" monitored by cold and remote technicians until the "time of birthing," when it will all be disconnected and, perhaps like Neo, flushed out of the system, or handed over to pre-selected "parents" to raise "it."  Of course, the scientismists will object that they can play pre-recorded conversations of the selected parents in the artificial "womb" and thus head off all possibility of whatever dehumanizing might occur. And this, of course, is the reduction. And we can envision more horrors of the reductionist kind as well, for "as the age of motherless birth approaches," so too, the age of fatherless conception must lie not far behind. And once the scientismists bring us there, with fatherless conceptions and motherless wombs and births, one can imagine the inevitable psychological impact.

And it will all continue until some bright(or really, just common sensical) psychologist notices that "something tends to be wrong" with the portion of the population "birthed" (or even "conceived") in this way, because the bottom line, folks, in spite of all attempts to reduce it to merely material processes or chemical reactions or statistics, is that love is not a material quantizable phenomenon, and anyone who tells you otherwise, is lying, and knows he (or she) is lying.

Read this article at - http://gizadeathstar.com/2015/02/the-transhumanist-scrapbook-artificial-wombs-and-motherless-births/
Posted by Unknown at 1:25 AM