Give Us Back Our Days: Gregory's Calendar Reform 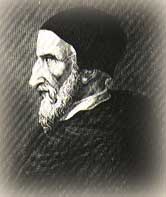 Give us back our eleven days!" protesters shouted. Bristol rioted. In a satirical painting, Hogarth shows a man getting drunk beside a poster demanding back the days.

Because the Julian calendar (promulgated by Julius Caesar) made the year too long by several minutes, it experienced three full days of displacement every 400 years. In 1582 it was out of sequence with the equinoxes by ten days and with Caesar's original dates by fourteen days. Several church councils had already discussed the problem but done nothing about it.

Gregory XIII was an energetic pope. Long active in church affairs and a patron of education, he was not one to let the matter continue indefinitely. He determined to correct the problem and on this day February 24, 1582,* acting on the recommendations of a special council, issued a bull requiring all Catholic countries to follow October 4 with October 15 that year. To illiterate people, it seemed as if real days were being stolen from them.

Although the papal commission, advised by Jesuit scientist Christopher Clavius, aided the Pope in making the reform, a similar plan had actually been propounded by Bishop Robert Grosseteste of England three hundred years earlier. This fact was not generally known, and resulted in an irony. The English, afraid of appearing to give too much deference to the Pope by adopting his calendar, rejected the Gregorian calendar and retained the Julian for another two centuries, oblivious to the fact it had been the proposal of their own native son Grosseteste. Britain and its American colonies adopted the new calendar only in 1752. By then, English calendars were eleven days off. Calendar reform even became an issue in political elections.

The Gregorian calendar was intended primarily for the benefit of the church which needed to plot the variable date of its most important feast, Easter (Paschal). At Easter Christ suffered for our sins and rose from the dead; and to this event Christians attribute all their hope of salvation. Nonetheless, the calendar reform affected the entire world. Although some nations, like China Japan and Russia did not adopt the reform until the twentieth century, all nations now use it for international business and for recording historical events.

*Some histories say the bull was issued February 13th.

Bibliography: Read this article at - http://www.christianity.com/church/church-history/timeline/1501-1600/give-us-back-our-days-gregorys-calendar-reform-11630031.html
Posted by Unknown at 12:49 AM