As I was posting the series, "Santa Claus, Pretender To The Throne" earlier this month, it occurred to me that Krampus, the Dark Helper of Santa in Northern European countries looked a lot like a character I knew from Dr. Seuss books growing up, The Grinch.  Now, if you have seen the old pics of Krampus, the leap to the Grinch is not a big one.  And looking at the facts, it's not much of a leap of logic at all.

Dr. Seuss (Theodor Seuss Geisel) was the son of German immigrants, who would have been quite familiar with the Krampus/dark helper stories.  Seuss stories were also readily embraced by the self proclaimed wickedest man who ever lived, the infamous Alistair Crowley.  Crowley stated in interviews that Seuss's stories were the perfect introduction into paganism and witchcraft.  Others have noted some decidedly unfriendly messages being passed on in his books. 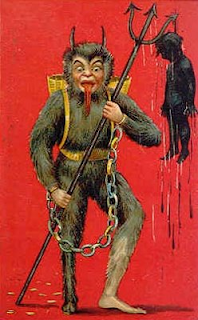 So was the Grinch really just a poetic version of Krampus, Santa's dark helper who was known to lick bad children, and perhaps devour them?  You be the judge.  I have decided for myself that the Grinch is just way to creepy to be part of my Christmas. 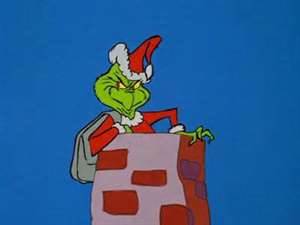 Here's a video showing Krampus celebrations from Germany.  (Celebration isn't really the word I'm looking for, but this is a parade.)

This is a brief review of Krampus.  If you want to get a bit more detail, please refer to the four part series, "Santa Claus, Pretender To The Throne".

Krampus is the dark companion of St. Nicholas, the traditional European winter gift-bringer who rewards good children each year on December 6. The kindly old Saint leaves the task of punishing bad children to a hell-bound counterpart

known by many names across the continent — Knecht Ruprecht, Certa, Perchten, Black Peter, Schmutzli, Pelznickel, Klaubauf, and Krampus. Usually seen as a classic devil with horns, cloven hooves and monstrous tongue, but can also be spotted as a sinister gentleman dressed in black or a hairy man-beast. Krampus punishes the naughty children, swatting them with switches and rusty chains before dragging them in baskets to a fiery place below.

Krampus is celebrated on Krampusnacht, which takes place on the eve of St. Nicholas’ Day. In Austria, Northern Italy and other parts of Europe, party-goers masquerade as devils, wild-men, and witches to participate in Krampuslauf (Krampus Run). Intoxicated and bearing torches, costumed devils caper and carouse through the streets terrifying child and adult alike. Krampusnacht is increasingly being celebrated in other parts of Europe such as Finland and France, as well as in many American cities.

The European practice of mummery during the winter solstice season can be traced back tens of thousands of years. Villagers across the continent dress up as animals, wild-men and mythic figures to parade and perform humorous plays. This ancient guising and masking tradition continues to this day as the primary source for our modern Halloween with its costumes, trick-or-treat, and pagan symbolism. Among the most common figures in these folk rituals were Old Man Winter and the horned Goat-Man — archetypes now found in the forms of Saint Nick/Santa Claus, and the Devil (‘Old Nick’), aka Krampus.

In 19th century New York City an American St. Nick emerged in the form of Santa Claus. Although based on the Dutch Saint Nicholas, Santa incorporated more elements from pagan winter solstice customs. He relinquished his white bishop garb for a red suit, traded his horse and staff for a sleigh and reindeer, and moved his franchise to Christmas Eve.

Santa also tried to take over the dark companion’s job of punishing the naughty, but his New World temperament was apparently unsuited for the task. As Santa neglected and abandoned his punishing duties, American kids lost all fear of Santa and his lumps of coal. Thankfully, in the 21st century, Krampus has arrived in this land of spoiled and dissatisfied children to pick up the slack.

In Austria and other parts of Europe, countless season’s greeting cards featured Krampus, often emblazoned with the phrase “Grüß Vom Krampus” (Greetings from Krampus). While the lurid images are suffused with a modern sense of the comic and the surreal, they still resonant with mythic power and primordial horror.

And with Krampus representing the naughty side of the season, the sexy subtext is hard to ignore in these often very cheeky cards. A century later, the brilliance of these magnificent works of pop art is now gaining global recognition.

BLAB! Magazine curator Monte Beauchamp reintroduced Krampus cards to America nearly a century after their heyday. His art books are the definitive works showcasing Krampus and other Devil-inspired greeting cards. A collector's market for Krampus cards has grown as the figure of Krampus pops up across the cultural landscape. Krampus has been featured on Adult Swim's The Venture Bros and the CW’s Supernatural; in 2009, Krampus visited the The Colbert Report and had Stephen shaking in his Brooks Brothers’ suit. Over the last decade, Krampusnacht celebrations have sprouted up in U.S. cities such as Portland and San Francisco.


A New Spirit of Xmas?

The hunger for a darker Xmas holiday has made the evil Santa Claus character a staple of pop culture, as seen in movies such as Rare Exports

, The Nightmare Before Christmas, books such as Dean Koontz's Santa's Twin

A new appreciation of ancient traditions that smoulder in the dark recesses of holiday revelry continues to rise around the world. Krampus, with his horns, hoove and tongue, embodies this revived spirit of the Xmas season!


Krampus Through the Ages

2000 BCEEnkidu appears in the Epic of Gilgamesh, the earliest known appearance of a 'Wild Man' in literature.

600 BCE In the book of Daniel in the Old Testament, King Nebuchadnezzar is punished by God for his pride when he is turned into a hairy beast.

217 BCE Saturnalia is introduced as a winter celebration in Rome, marked by gift giving, wild parties, and a reversal of the normal social roles of slave and master.

4th Century CEDue to Roman influence, many Germanic tribes, such as the Goths and Vandals, convert to Christianity; their pagan traditions survive in small villages in the Alps where the Church cannot penetrate.

1250 CE King's Mirror, a Norwegian text, features a Wild Man character who is described as being covered in hair.

Early 19th Century CE Germanic and Dutch immigrants to the US popularize 'Pelznickel' traditions in Pennsylvania, Maryland, and as far west as Indiana.

2004 CE Blab! Magazine curator Monte Beauchamp publishes Devil In Design, a collection of vintage Krampus postcards from the turn of the 19th century. This book marks an increase in Krampus' popularity in the English speaking world.

2009 CE American satirist Stephen Colbert is visited by Krampus on his television show The Colbert Report.
Posted by Unknown at 12:31 AM