French Revolution Cult of Supreme Being

The "Age of Reason" was just another cover for a small group of people seeking to gain control over a nation. This was clearly a forerunner to the same tactics that would be used in Russia to end the royal family's reign there and institute another atheistic controlling government that robbed and subjugated the people for the gain of a few.  And I rear we haven't seen the end of violent revolutions engineered by a hidden elite, as it seems many more are now on the horizon.... 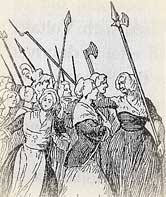 "Reason is God," said the leaders of the French Revolution. But people are so unreasonable that the revolutionary leader, Robespierre, soon realized that reason makes a weak God. He became afraid that without belief in some powerful being like the Judeo-Christian God, morals would collapse. Then where would the Republic be? Strong nations need strong virtues.

On this day, May 7, 1794, the Committee of Public Safety, which controlled France, decreed worship of a Supreme Being. This was not the God of the Bible, who enters into personal relationships with men, but a Deist god. Eighteenth-century Deism taught that God created the universe but did not interfere in its operation. According to the Deists, their god could be discovered through natural law and his existence was an inspiration to moral behavior.

That June, Robespierre organized a festival of the Supreme Being. At that festival it was proclaimed, "The day forever fortunate has arrived, which the French people have consecrated to the Supreme Being. Never has the world which he created offered to him a spectacle so worthy of his notice. He has seen reigning on the earth tyranny, crime, and imposture. He sees at this moment a whole nation, grappling with all the oppressions of the human race, suspend the course of its heroic labors to elevate its thoughts and vows toward the great Being who has given it the mission it has undertaken and the strength to accomplish it.

"Is it not he whose immortal hand, engraving on the heart of man the code of justice and equality, has written there the death sentence of tyrants? Is it not he who, from the beginning of time, decreed for all the ages and for all peoples liberty, good faith, and justice?" *

Fearful of further bouts of terror, the revolutionary Committee engineered Robespierre's downfall and execution. The blade of the guillotine was soon stained with his own blood.

* Note: while Christians recognize God as the Supreme Being (a term not used in the Scripture), they also know Him by the more humane name "Father."

Bibliography:
Read this article at -  http://www.christianity.com/church/church-history/timeline/1701-1800/french-revolution-cult-of-supreme-being-11630325.html
Posted by Unknown at 2:47 AM