I'm going through a short series on the pre-trib rapture myth. The pre-trib view states that we might be raptured away at any moment. The Bible fails to support this idea, anywhere, in anyway, but that hasn't stopped the popularity of this lie as it has spread through churches in the West. Who wouldn't want to think that Jesus will "snatch" them away before something bad happens. We will discuss why this doesn't work from a biblical framework in the coming days. Part 1 here is the origin of the view. It was not voiced in any church writings or documents before the 19th century. Unfortunately for the pre-trib view, it's off to a bad start.

Let me add, what is most important here is the Lord gave us the scriptures to know Him (John 17:3) and to know His plan. I hope this series helps us to see His plan clearly, and to be prepared for the great storms that have gathered on the horizon.

Origin of the Pre-Trib Rapture Theory 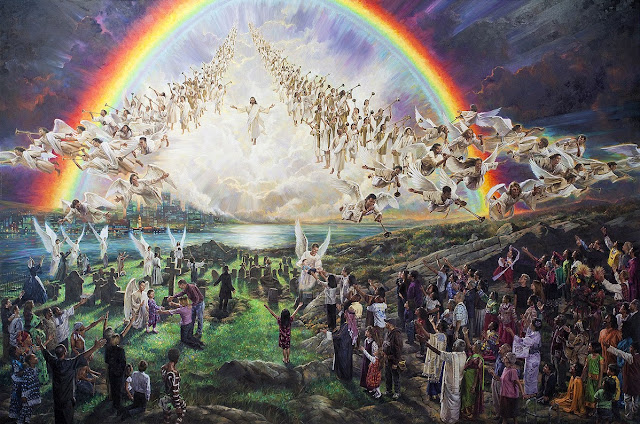 The pre-trib rapture theory is not something that God has revealed to us in these last days. Indeed it is a doctrine from demons that has been perpetuated through well-meaning men for the past few generations.
There is no known writing existing, or referred to by other writers, of the pre-trib rapture teaching prior to 1830. None of the early Church fathers or anyone else throughout Church history wrote about the saints being raptured before the end-time Great Tribulation. This does not conclusively mean that the theory is false, only that it is a historical fact that this teaching did not exist among the early Christians or the Church fathers or any Christians throughout history until 1830.
Reportedly the origin of the pre-trib rapture teaching was with a fifteen-year-old girl named Margaret MacDonald in the town of Port Glasgow, Scotland. Supposedly in 1830 she had a dream or vision that Christians were raptured just prior to the Great Tribulation. In 1831 or 1832 a Presbyterian pastor in London, England named Edward Irving heard about this dream or vision that Miss MacDonald had and started teaching it to his congregation. These are well-known reports among scholars of eschatology.
These reports concerning the origin of the pre-trib rapture theory may or may not be true. What is well-documented is the fact that John Nelson Darby, the founder of a group known as the Plymouth Brethren, after visiting Miss MacDonald began teaching this new theory.
Later, by 1917, C. I. Scofield had published his improved edition of the Scofield Reference Bible which contained the dispensational pre-tribulation teachings of Darby and others. Soon many Bible Colleges such as Moody Bible Institute and seminaries such as Dallas Theological Seminary became staunch promoters of dispensational theology that included the doctrine of a pre-tribulation rapture.
In 1970 Hal Lindsey, who attended Dallas Theological Seminary, popularized this teaching with his book titled The Late Great Planet Earth. Several million copies have been sold and a movie by the same title was made.
The widespread acceptance of a doctrine does not make it true. What really matters is not whether some Bible colleges and seminaries teach the pre-tribulation rapture theory, or whether many pastors teach it, or whether many Christians accept it as true; what really matters is what does the Word of God say?
Most Christians in this country are not spiritually ready to go through what is on the horizon if it is as late as we think it is. The days of the Great Tribulation will be the worst time that this world has ever seen. And this earth has seen some very bad times. Probably not many Christians will be ready to go through the Great Tribulation, but believing that you are going to be raptured out before it begins is certainly not conducive to spiritual preparation for it.

Read more at - http://www.bethelministries.com/pretrib.htm
Posted by Unknown at 1:40 AM